Vitamin A’s (a Retinoid) role in anti-aging creams is primarily to smooth the skin’s appearance and help to reduce the look of fine lines and wrinkles. It also has been proven to be beneficial for problem skin. In fact, it is one of the most exciting and well-researched ingredients in skincare today. With that said, there is still much confusion regarding the various forms and versions of Vitamin A, including why the percentages and strengths of this very important ingredient matter.

The term (Retinoid) describes a group of Vitamin A derivatives that have been proven to help make skin smooth and soft, while also unclogging pores. They also help to stimulate collagen production, reducing fine lines, and encouraging cellular turnover to increase radiance. The first retinoid—tretinoin—was FDA approved, and released under the brand name Retin-A, almost 40 years ago as a prescription acne treatment. Soon after, Dermatologists quickly noticed that patients on Retin-A experienced not just clearer, but also softer, brighter, radiant skin.

Today there are three prescription-strength Retinoids: Tretinoin, Tazarotene, and Adapalene. Many dermatologists have found Tazarotene stronger (and potentially more irritating) than Tretinoin; Adapalene, is the gentlest to the skin but may be less effective. While prescription formulas have yielded the most impressive results, they also can be quite irritating to the skin.

One of the most popular over-the-counter versions of (Vitamin A) is called Retinol. In fact, Retinol is the “name” often used when describing all the different variations and forms of this (Vitamin A) ingredient and also why some confusion happens when it is referenced.

Ok, here’s what we know.

Retinol rejuvenates the skin. Retinol helps skin keep its youthful, full appearance while also helping to improve the skins texture.
Retinol gives skin an overall healthier appearance. Retinol can help reduce discoloration, fine lines, wrinkles and skin texture by helping to enhance the firmness & thickness of the skin. Plus, it can improve skin tone and radiance for generally younger-looking skin.
Retinol stimulates cell turnover. Exfoliation is essential for youthful-looking, healthy skin. By removing the dead skin cells on a regular basis, new, healthier cells are able to emerge and your complexion also looks smoother.
Retinol addresses problem skin. Retinol is widely used for the treatment of problem skin, but it is also used to combat skin damage that results from the sun and aging. While Retinol works to help reduce telltale signs of aging, it also treats “problem-ridden” skin. Adult breakouts are common, affecting 50 percent of women and dealing with both aging and problem skin, and it can be particularly depressing. Fortunately, because of Retinol’s exfoliating benefits, it can also help in the treatment of these issues by helping to remove dead skin cells that can clog pores, ultimately helping to prevent breakouts.
Retinol is less irritating than Retinoic Acid. Pure Retinoic acid is only available by prescription from your dermatologist. Though considered more potent than the over-the-counter counterparts, they are also more irritating to the skin with potential side effects like peeling and redness.

All forms of Retinoids (over the counter) must convert into Retinoic Acid in order for the body to absorb the ingredient, which in turn results in the benefits described above.

The efficacy of Retinol (and the effectiveness of all of the versions of Retinoids) is because Retinol has to convert into Retinoic Acid to be able to be effective on the skin, it is less potent than the doctor prescribed version (Example: Retin-A).
Gentler still, (but unfortunately without much direct effect on the skin), are the various types of esters, which are also derivatives of Vitamin A: These are listed on product labels as Retinyl Acetate, Retinyl Linoleate, Retinyl Palmitate and Retinyl Proprionate.
The different versions of Retinoids, and how they convert, is the key to understanding some of the confusion surrounding Retinol and why the specific type of Retinoid, and the stability of that form, is so important to achieve results.

In a nutshell, for any Vitamin A derivative to be effective, it must first convert into Retinoic Acid.

Percentages and effectiveness. Is more, better?

The conclusion is that the percentage of the ingredient doesnt matter as much as the form of retinoid used. Retinol is far more effective (yielding better, end consumer results) if it is stabilized and is able to keep its activity.

So, to repeat myself, because it is an important point. what is ultimately more important than the percentage of the Retinol, is the effectiveness of the particular Retinoid used.

Finding a stable Retinol product that has a high enough concentration level to be effective, and without being too high to cause skin irritation can be difficult. 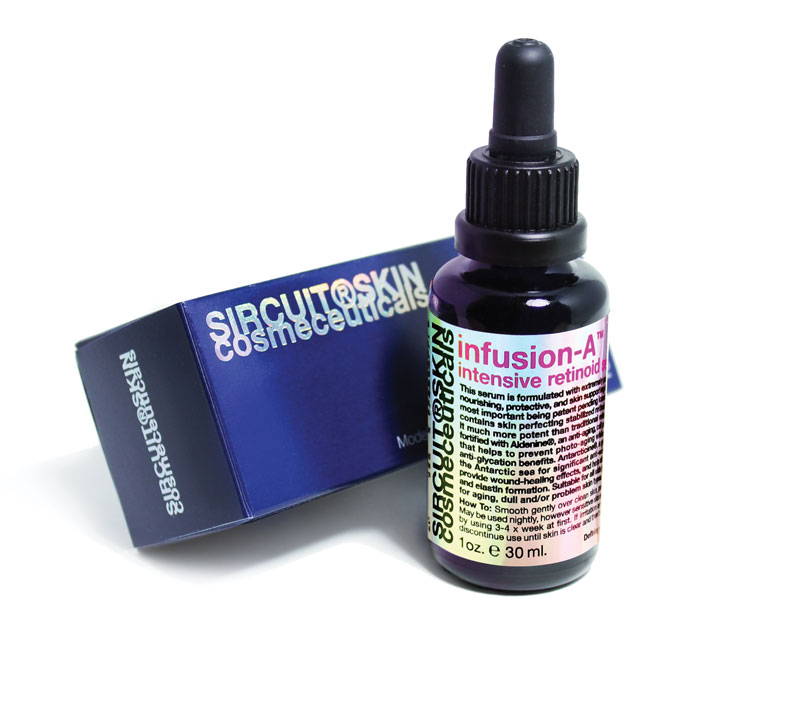 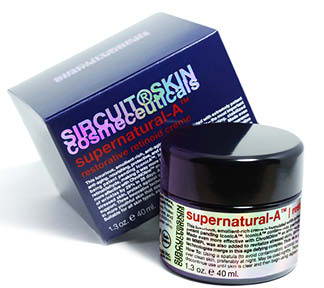 Thankfully, research in this area has yielded an amazing new breakthrough.

Now, for the first time, a brand new patent pending, stabilized Retinaldehyde (Retinal) called IconicA® which is one conversion step away from Retinoic Acid has been introduced. IconicA® offers more effectiveness than what is usually associated with stronger strength Retinols, while also dramatically reducing the opportunity for dryness and irritation. It is the one ingredient that has successfully utilized a naturally encapsulated and stabilized Retinaldehyde (Retinal), keeping it fresh and ready to be utilized by the skin.

It is the perfect skin solution for those looking for an effective Retinol product and proudly featured in two of SIRCUIT®s newest "Must Have" beauty treatment products. Supernatural-A (Encapsulated Retinaldehyde, (Retinal) 0.1%) and Infusion-A serum (Encapsulated Retinaldehyde (Retinal) 0.1%) are wowing critics and taking the country by storm. Finally, the skin solutions consumers have been waiting for.

I hope this helps to clear up some of the confusion regarding this amazing ingredient and highlights the incredible potential of IconicA®.

WHAT ARE YOU LOOKING FOR?

Do you want to add products to your personal account?